In my never-to-be-realized quest to identify and sample the 100 best dining spots in Paris, I spend hours reading the reviews from a variety of opinion pages, web sites, books and magazines. Trip Adviser, Zagat, Travel & Leisure, the list goes on . . . and on.  Notes and cross references are stored helter skelter in my office, on my computer and cell phone, and in a small 3″ X 5″ moleskine journal – my trusty “Little Black Book”.

To appreciate the daunting task I’ve set for myself, consider that Trip Adviser  lists 13,435 restaurants, bistros and cafes on its Paris web site . If one could magically reduce that figure down to the top one percent, there would still be 134 eateries on the list. An aggressive campaign of two meals a day (lunch and dinner) every day, seven days a week, would require almost ten weeks to try them all. And remember, this is all based on some divine intelligence revealing the top 1% to me in advance.

I won’t even delve into the dozens of variables involved in trying to hit this moving target; old restaurants closing, new bistro’s opening, change of chef, change of owner, etc. Suffice it to say that it’s an impossible dream worthy of  Don Quixote. 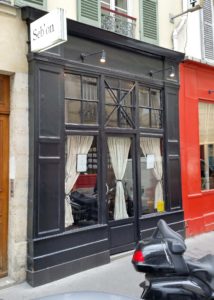 Rather than be driven crazy by the exponential odds, I have become, in my mature years, philosophical on the subject. The Top 100 remains as an idealized goal, a culinary Holy Grail. But in everyday practice, I strive to simply find a “Winner” each day; an eatery that either reconfirms my earlier opinion of it or a new spot which provides that rare serendipitous experience that makes me add it to my top 100. Serendipity was indeed the descriptor on my recent first visit to a tiny bistro on the lower slopes of Montmartre; Seb’on

After the elevator ascent-to-the-surface from the Abbesses Métro station (At 40 meters, the deepest in Paris), it is only a slanting left, a right and immediate left to arrive at rue d’Orcel where Seb’on comes immediately into view at number 62.

It was lunchtime on a Saturday, a fortunate coincidence as it turns out, since I later learned that Seb’on only serves lunch on the weekends. I thought I’d have dejeuner before re-exploring some long-ago-visited corners of Montmartre, and some post-hypnotic suggestion from Zagat or Yelp made Seb’on spring to mind.

I arrived at 12:30 pm and squeezed into the tiny dining room with its 10 small tables and 20 chairs. After replying “Non” to the courteous young waiter’s inquiry about a reservation, I received the bad news: “C’est complet” (We’re full). 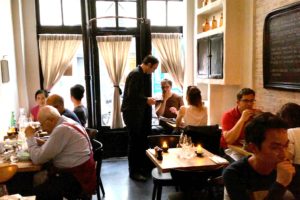 Apparently the disappointment oozing from my every pore gave him enough pause to utter the afterthought, “Unless monsieur wishes to sit at the counter?” I accepted the offer with a shrug of grateful resignation, but secretly could not have been more pleased. When dining alone, the counter is my favorite spot. It is from this vortex that the interaction between house and kitchen, staff and client is best observed and studied.

The tiny two seat counter was in keeping with the tight dimensions of the dining room, but gave me a direct view into the smallest kitchen I believe I’ve ever seen. A window that must have existed since the building’s original construction now serves as the pass-through from the chef, in the add-on closet-size kitchen, to the waiter. 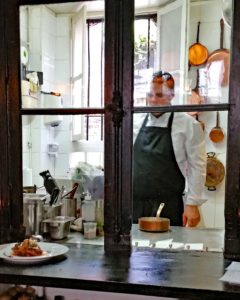 The menu, a white sheet of paper with the day’s offering printed in 14 point Times Roman, was slipped under my elbow as I enjoyed a glass of crisp Sancerre. Three starters, three main courses and 3 desserts; a minimalist offering necessitated by such a small kitchen, but for lunch it made complete sense.

The plainness of the menu belied the sophistication of the courses. I ended up ordering a marvelous veal ravioli starter, followed by filet of Cod with black rice, shiitake mushrooms and lemon grass & coconut foam. Dessert would be a peach panna cotta. Shortly after ordering, a gentleman brushed against me as he asked the waiter if he might take a snapshot of the label on the bottle of wine he had enjoyed with his meal. As the waiter rummaged around for the empty bottle, the fellow whispered that I was definitely going to enjoy the veal ravioli (his overhearing my order was an indication of how close the quarters were throughout the restaurant). He and his wife were “Foodies” from Pennsylvania and he had  been trying for some time to arrange reservations here. I got his card and he got mine, then we both dropped names of other Parisian dining places we each thought would impress the other. As he departed I made a  favorable mental note that Seb’on, despite its size and location, had established its credentials as far afield as the suburbs of Philadelphia.

Now on my second Sancerre and the main dish, I was able to strike up a conversation with the waiter. “Normally” he 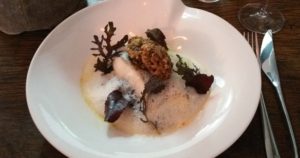 said, “It is the owner’s wife who handles the front of the house, but she is on assignment with another job so I’m helping out my old friend, Sebastian.” Our chit chat drew the chef out of the kitchen and from him I got a fairly complete dossier. He, Sebastian Heloin, had been in the culinary business since the age of 13. At 20 he began an apprenticeship under a string of chefs whose names read like a list of culinary Who’s Who: Benoit Guichard at Jamin, Michel Roth and Guy Legay at the Ritz, Yannick Alleno at the Scribe and Eric Frechon at the Bristol. He then perfected his craft at Michelin-star hotel restaurants in Switzerland, Belgium and Holland. Now in his mid 30’s, he and wife, Dorota, were making a go of it on heir own. She is also a talented set designer and was away on a movie shoot. His old pal Steve was filling in for her. With a grin and some pride in the clever name of the restaurant, he explained that Seb’on is a rhyming play-on-words with his own nick name, Seb, and the French phrase, “C’est bon” (It’s Good). Cute enough, I thought.

After the astonishingly excellent first and second course, I should not have been surprised by my dessert, but I have to say, it was nothing short of phenomenal. The masterfully executed peach-flavored custard with elder-flower ice cream was a visual work of art as well as culinary nirvana.

When I asked for a recommendation on a suitable dessert wine, Steve produced a  Mas Julien Languedoc  rosé aperitif – Perfect with the dessert.

L’addition provided another pleasant surprise. The bill, excluding wine, came to exactly 50 Euros – a true bargain for the quality and overall experience.

Bottom Line: This is one of those small fairy-tale places that is actually as good or better than the reviews state; well worth a pilgrimage up the Martyr’s Mount. Reserve well in advance and go soon –  perfection is a fleeting thing.